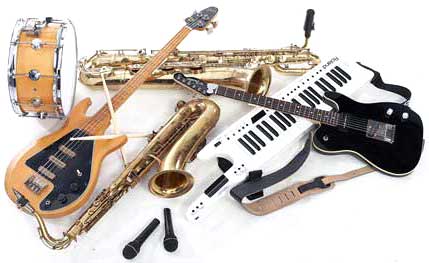 San Diego's most well-known and loved nostalgia band. Since 1982 this popular seven-piece group has been performing dynamic renditions of the best music from the 50's - 70's. The band has now expanded its repertoire to include select hits from the 80's and 90's as well as swing standards from the 40's. Because of their unique versatility The Fabulous Mar Dels are the perfect group for any event. Audiences and clients both locally and internationally have been delighted with their outstanding choice of swing, rock, and Motown classics.

Charismatic front man Doug Allen is an amazing entertainer. Not only is this gifted performer a crowd-pleaser with his crazy antics, singing and keyboard playing, but he can literally stop the show with uncommon saxophone abilities, including playing the horn upside down or even two saxophones at once!
Combine Allen's charm with two impressive female lead vocalists and the entertainment is non-stop. The girls create a powerful chemistry for the show with their strong lead vocals, beautiful harmonies, dazzling costumes and glamorous presence.

Great music, top notch entertainment, The Mar Dels are legendary not only for this, but also for their ability to whip a crowd up into a dancing frenzy. When The Mar Dels take the stage, you can feel the magic in the air!

If you like the music of Elvis Presley, Aretha Franklin, Jerry Lee Lewis, Sam and Dave, Buddy Holly, Van Morrison, Whitney Houston, Patsy Cline, Steppenwolf, Frank Sinatra, Glen Miller, The Doors, The Ventures, The Platters, The Stones, The Stray Cats, The B-52's, and The Village People, this band does all that and much more! The Mar Dels have the talent and experience to make your event a success!